Rome: The Eliteness of the Art, Architecture and Sculpture

“Roma Caput Mundi”:- Rome is the capital and the centre of the world, this the ancient phrase that the kings and rulers of Rome used to describe the city settled in the Palatine hill. Owing to the millennia-long histories and the continuous status as the capital of Italy throughout history to present, Rome or Roma is the eternal city.

Rome or the city of Roma is the world’s most popular tourist destination and most of the international travel company, tour agencies and association has awarded as the tourist’s most popular choice. The ancient history of the city and the monuments, heritages, and ruins that the time kept itself from the hand of the ancient artisans and history of the roman empire to the modern Italian civilization and urbanization, are like a living object that the creator just leaves them without living and breath.

Italy is the country with The Most Concentration UNESCO World Heritage Sites. The vibrant, lively and lovely Rome is the cosmopolitan city in Italy. With the great fusion of the ancient history with the modern innovation, the unique ancient heritages are like nowhere else in the world are the great reminders of the greatness of the Roma from the very first inhabitation.

The witness of the history is full of the ancient temples, heritages, museums marvellous palaces, prominent splendours of the Squares fusion with he modern days beautiful cafes and restaurant and the vibrant beauty of the nature spread through the air, Rome is like a separate world designed to give the person visiting the unique and distinctive experience in the pinnacle of the Seven Hills.

Some of the major places you must visit while in Rome are as follows: 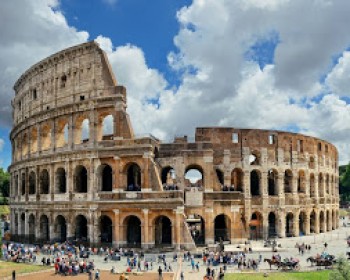 Among the greatness of the eternal city, Colosseum is the definitely the par excellence highlighting the enrich arts and architecture of the Ancient Rome. The Solemn Travertink brick structure in a valley among the Roman Hills in Palatino is the magnificent masterpiece of the that time’s Rome. The 45.5 meters high structure with four floors (10.5 meters, 12.5 meters, 11.6 meters and 11.9 meters each respectively) is expanded in the area of 19000 square meters.

The magnificent giant structure is Italy's most popular site in Rome and millions of tourist from around the world has made the appearance so they have the experience of the masterclass left by the Romans to the new and modern Era. 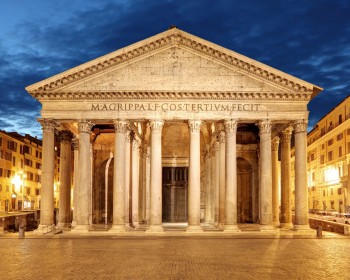 Previously, the Roman temple now one finest catholic Church, is the great skill of the 1st-century arts and architecture. The Temple is the great witness showing the power and the dignity of Rome. Everything in the temple and the around the monuments is like a supernatural object that is even almost impossible to craft with modern innovative technologies. Through the colourful floor to great Monolithic pillars outside, the whole structure and the arts of presenting will definitely blow the mind.

The world’s Most Recognized Squares, Piazza Navona, the ancient heart of Rome, is a big 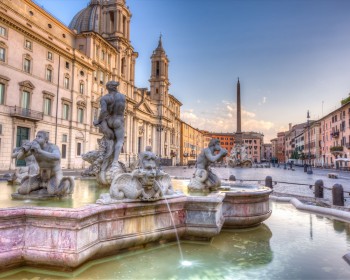 surprise coming suddenly. Walking through the narrow alley, you suddenly approach at the wide, long expanded with beautiful sunlight and colourful cafes around, it the land you standing in the Piazza Navona with a big surprise and open-air entertainment. This is the perfect place to take photos and collect memories of Rome with your beloved ones or the group with whom you are entraining the Rome Visit. It was used for the big festivals, sports, events and other mass gatherings during the Roman era. The first-century witness is so perfect to spend a while in the fresh air in Rome. Once a beautiful ground of celebration is even more beautiful and amazing than the modern days huge 0building and malls.

The most iconic and most pretty fountain in Itali, Trevi Fountain in Trivia, is one of the most popular 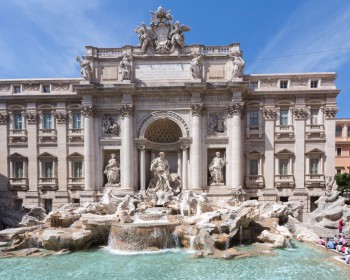 tourist destinations in Italy. The 20 wide and 26 meters high Trevi Fountain is the largest in the city of Rome. The fountain is not popular for the extreme waterwork, but the artisan magic given to the fountain is more precious and the beautiful of the whole structure is the masterclass of the Roman architecture and arts. The crafts around carved in the fountains are so precious and priceless. Through the light of the sun in a day to the warmth lit up in the night, the fountain is always alive and continuously telling the visitors the richness of the ancient era.

The glorious Sistine Chapel is the crowning jewel of the Renaissance painting. The private chapel of the Pope is such a marvellous master-class, that everyone looking at those paintings will be a speechless and full surprise that who is it possible to make the arts like that. The beyond-the-imagination

masterpiece of the artisans will mesmerize everyone who enters the chapel.

Other mos popular places and top sights to visit in Rome