Dreaming to be in front of the world's highest peak and most noteworthy mountains of Nepal without any effort? A helicopter tour in Nepal is the most effective way to partake in the spectacular perspectives of the Himalayas in a brief timeframe by riding a helicopter. Nepal Helicopter tour over the mountains gives you the kind of views that you don't see every day. The Everest Base Camp Helicopter tour is one of the most popular tours in the world.

Nepal is a delightful country from each point, however, there is something special about seeing it from the air. A helicopter tour is an interesting way for joining transport with touring among the world's tallest mountains and most profound valleys-and it's the ideal arrangement assuming that you're in a rush. Moreover, the Helicopter tour in Nepal is not just limited to the Everest Base Camp helicopter tour. It is a wide range package of mountain views, city touring, research tours, photography visits, and shooting visits in Nepal are some variants of Helicopter tours in Nepal.

Everest Base Camp Helicopter visit is great for individuals who need more timeframe to travel a long time for various days. Everest base camp Helicopter tour takes you up through the highest peak of the world. This Helicopter tour is a great chance to take off across the Himalayas on a helicopter departure from Kathmandu to Mount Everest Base Camp, landing either for a luxurious breakfast or an amazing experience with tremendous mountain vistas. This is a once-in-a-lifetime experience where you'll get aeronautical perspectives on glaciers, camps, and mountaineering routes on the world's most elevated mountain. This grand helicopter ride will take you through some amazing mountain ranges of Shishapangma 8012m, Gaurishankar 7134m, Cho Oyu 8201m, Makalu 8463m. Everest Helicopter Tour for Breakfast is another famous helicopter tour after Everest Base Camp Helicopter Tour. 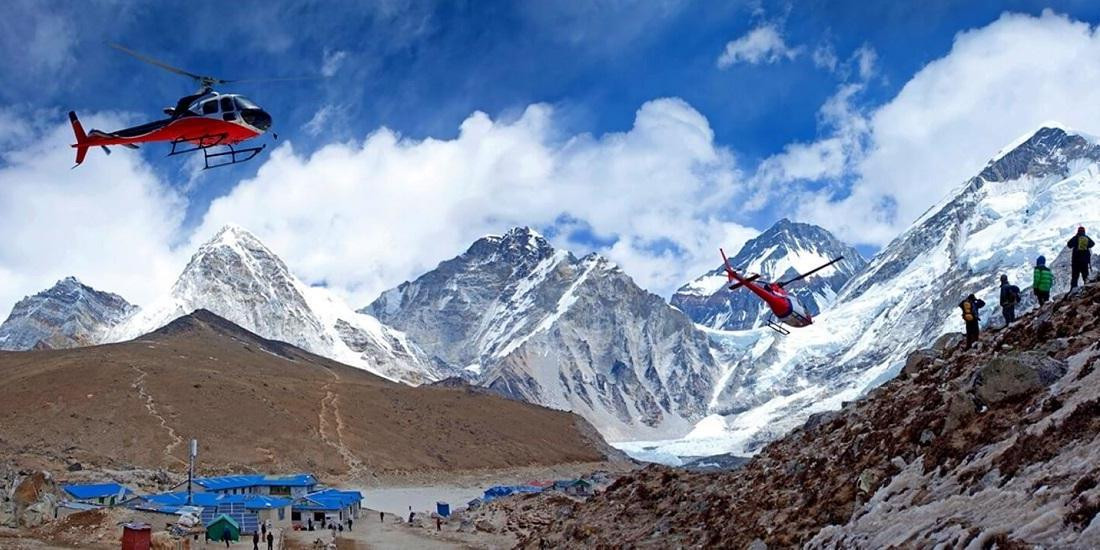 Langtang Helicopter tour is considered one of the most picturesque helicopter trips to investigate the Himalayas close to Kathmandu. Langtang is the nearest mountain reachable from Kathmandu. After Everest and Annapurna region, Langtang is the third most famous destination for trekking. The Langtang Helicopter tour begins from Kathmandu airport toward the north following the Langtang range where you can experience the sensation of the mountain view in front of you. 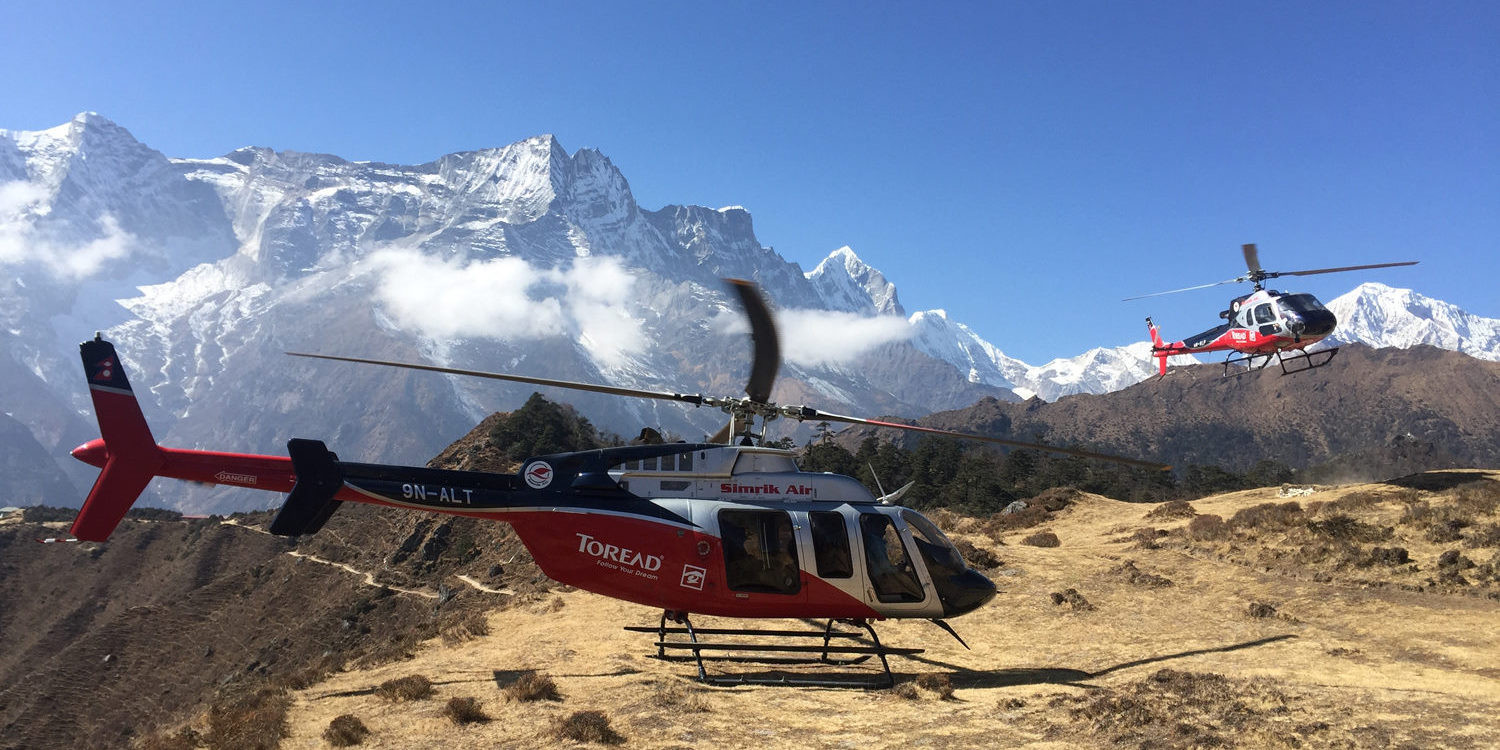 As you enter the Langtang National Park, you will track down sensational contrasting scenes, topography, vegetation, and mountainous landscape. The flight lands at Kyanjin Gompa (3,950m), a Tibetan culture-influenced town decorated with breathtaking landscapes, old religious communities, and amazing mountain vistas. You will get the most extreme 20 minutes to 30 minutes for exploration and breakfast as holding longer could cause a serious altitude hazard.
During this 90 minutes extraordinary helicopter tour you will get exceptional views of extraordinary zeniths like Mount Langtang Lirung (7,246m), Ganesh Himal (7,407m), and Mount Dorje Lapka (6,975m). Along with these mountains' views, Gosainkunda lake is a notable attraction of the Langtang Helicopter Tour.

Upper Mustang Helicopter visit will take you on one of the most adventurous and captivating journeys you can ever go. This helicopter tour will take you to the core of Lo Kingdom where you will encounter the forbidden kingdom within a day without hiking in Mustang trails or rough street drive. This is an opportunity to explore an interesting methodical and socially rich locale, that exists in the western piece of Nepal. The Upper Mustang Helicopter tour helps you explore the oldest Gompa in the world, lord of Mustang, and fly over Annapurna trekking trails.

The local culture and way of life in Mustang are practically influenced by Tibetans. It is an old valley generally viewed as pristine and socially protected. Lo-Manthang is the capital city of the Lo realm since the primary lord, Ama Pal. As a result of the remote and interesting landscape, a helicopter tour to the upper Mustang becomes productive to explore this lovely valley which reminisces the vibe of Tibet. Upper Mustang helicopter tour offers delightful Himalayan perspectives on three above 8000m mountains ( Mt. Dhaulagiri 8167m, Mt. Manaslu 8163m, Mt. Annapurna 8091m) with 18snow capped Annapurna region.
The Upper Mustang Helicopter tour starts with a domestic flight from Kathmandu to Pokhara and back to Kathmandu. The Upper Mustang Helicopter tour begins and ends at Pokhara.

Annapurna Base Camp Helicopter Tour offers you the chance to witness numerous sensational scenes, rich and primitive valleys, and staggering mountain ranges of the whole Annapurna locale. The helicopter visit comprises the quickest and most magnificent way to convey close perspectives on different mountains belonging to the Annapurna locale and get a great encounter of wilderness. Annapurna Base camp Helicopter tour might provide you with the delight of venturing to Annapurna basecamp trailing route with the best mountain vistas. This helicopter visit is suitable for those explorers/travelers who haven't sufficient time to go for the Annapurna basecamp trek.

The helicopter tour to the Annapurna region is accessible for explorers from both Pokhara and Kathmandu. In both of these choices, you will get the chance to get mountain perspectives on the omnipotent Mount Everest and other mountain pinnacles of the Himalayan regions, alongside the culture followed by Sherpa individuals. Moreover, the Annapurna Base Camp Helicopter tour explores the two high Himalayan headquarters ( Annapurna and Fishtail/Machhapuchhare Base camp) as well as stunning Himalayan views on two above 8000m mountains - Annapurna I. 8091m, Dhaulagiri 8167m Mt. Annapurna I.8091m, Annapurna south, Annapurna II, III, IV, Fishtail, Nilgiri, Hiunchuli, Machhapuchhare, Lamjung Himal, Butterfly mountains with other noteworthy snowcapped mountains within 4 hours from Kathmandu. You will spend around 30 minutes appreciating tea/espresso and the splendid mountain view of the Annapurna Himalayan periphery.

The trip to Mardi Himal Base Camp is a sublime Himalayan experience that gives you the flavor of the frosty atmosphere and alluring beauty. All things considered, Mardi Himal Heli Tour embraces the worth of the trek and adds it to the fun of a helicopter ride. Hence, this short visit is well known for a heavenly presentation of the mountains in Lamjung Himal, Annapurna, and Dhaulagiri ranges. All things considered, the Mardi Himal Base Camp Heli Tour is a quick departure to the mountains in the Annapurna locale.

Situated at the elevation of 3650 m, Mardi Himal High Camp overstates the shocking Himalayas Mountains including Annapurna I at 8,091 m. With this Mardi Helicopter Tour, you will stand in front of famous Fishtail Mountain, while encompassed by numerous different pinnacles. Nonetheless, the finish point of this Mardi Base Camp Helicopter Tour from Pokhara is 4,249 m which is Mardi Himal Upper View Point. The Mardi Himal Base Camp helicopter tour is easy, simple, and suitable for all age groups. This visit can be finished on a solitary day, so it is additionally an extraordinary choice for those with limited time to explore Nepal.

The excursion begins from Pokhara airport. With the take-off, you can savor the ariel view of the lake city Pokhara. Sarangkot, World Peace Stupa, and Dhampus Village additionally appear. Then, the lively ride stops once you arrive at Mardi Himal Base Camp or Mardi Upper View Point. After arriving at Base Camp, you can partake in the amazing panoramic view of the Himalayas in the Annapurna and Dhaulagiri ranges. The Heli visit to Mardi Himal Base Camp is a simple excursion reasonable for explorers of all ages gatherings. This is an ideal way to explore Mardi Base Camp for those individuals who are not able to make it possible for trekking.