Nepal is not just limited to being known for its high ranges. Nepal is more than just a country of Mount Everest. Along with the high mountains, hills, and trekking sites, Nepal is home to various festivals and cultures. Nepal is a pristine land full of feasts and festivities. It is a bouquet full of diverse religions, cultures, ethnicity, and language. Visiting Nepal during the festivals is a tremendous opportunity to peek deeply into the Nepalese diverse culture and customs. Nepalese festivals are celebrated following the Nepalese lunar calendar.

Over 50 Festivals are commended in Nepal every year with massive excitement. Most of the festival holds religious significance, whereas some carry historical essence. Numerous festivals celebrated in Nepal commune with various Hindu and Buddhist divine deities. Festival Tour in Nepal gives you the vision of a rich culture full of life. These celebrations likewise help you to look deep into the social, customary, and provincial diversity of Nepal that holds the extraordinary position for every  Nepalese people.
Here is the list of some festivals you may join in your future Nepal trip.

The Bisket Jatra Chariot rally is one of the best occasions to celebrate in Bhaktapur. Bisket Jatra, likewise popular as Nepal New Year Festival, begins in mid-April, the start of Nepali Baisakh month (Nepali New year day). It's likewise one of the most interesting yearly festivals in Nepal, drawing in visitors from everywhere in the world.

As Nepal is the origination of the Lord Buddha, this celebration is vital and honor for Nepali people, particularly for Buddhist groups all through the country.
Buddha Jayanti is celebrated on the auspicious occasion of the birth date of Gautam Buddha. Siddhartha Gautam (Gautam Buddha) was brought into the world around 543 BC in Kapilvastu of Nepal.  It is the most sacrosanct day in Buddhist society.
This significant day is celebrated on the full moon day of the month Baisakh (1st month of Nepali lunar calendar) which occurs between April-May in the Gregorian calendar. The full moon of Baisakh(April-May) carries exceptional importance because of the birth of Buddha and the day Budha accomplished edification and Nirvana. This triple commemoration makes Buddha Purnima a consequential celebration.
Lumbini, the origin of Buddha, Namo Buddha are the prominent spots to visit during Buddha Jayanti outside of the Kathmandu Valley. In Kathmandu Valley, Swoyambhunath and Buddhanath are major appealing spots to visit in the Buddha Jayanti. 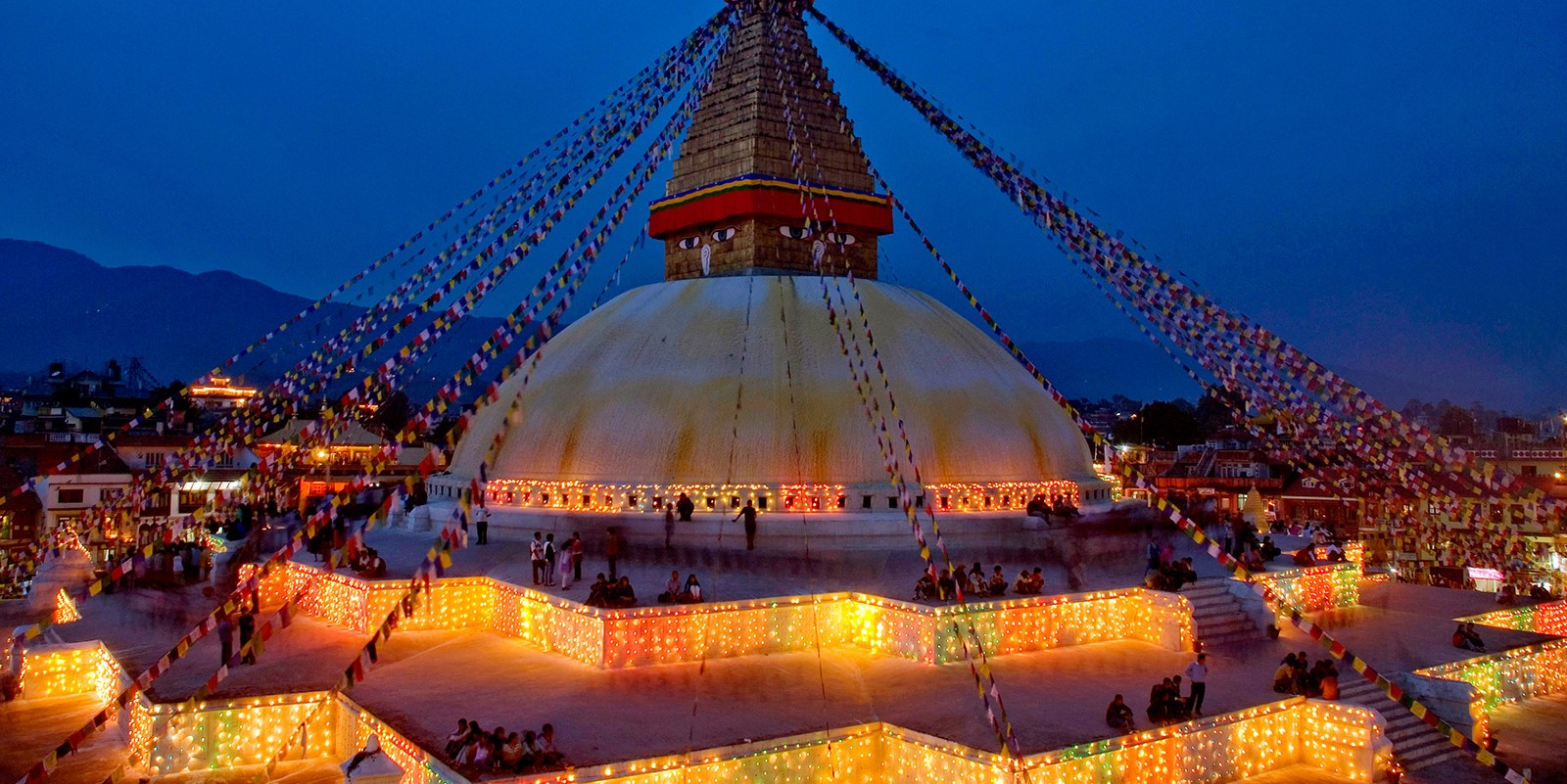 Janai Purnima is one of the major festivals of Hindus. It is celebrated in the month between Shrawan and Bhadra. This day is additionally called Raksha Bandhan. Rakshya means to Protect and Bandhan is a bond. Rakshya Bandhan is a duty of security. Rakshya Bandhan is the function involved with wearing sacred string around the wrist by preachers by reciting the mantra:
"एन बद्धु बलि राजा दानबिन्द्रो महावल
तेन त्वं बध नामी रक्षे मा चल मा चल"
Significance of the Mantra:
"I tie on you (the devotee) the Raksha which was tied on Bali, the King of evil spirits.
In this way Oh Raksha! Never neglect to safeguard this devotee."

It is a sacred string celebration. Hindu men, particularly Brahmins and Chettris celebrate this day as their yearly exchange of Janai or sacrosanct thread and put it around their bodies. The Janai initiates the kid into masculinity and controls them to devotedly follow the religion and way of reality. Hindu males began wearing this string after a religious ceremony called Bratabandha.  Janai should be worn the entire life and the mantra ought to be chanted every day. Janai is considered as the image of the body, discourse, and mind. Wearing the Janai implies the knots are tied and the individual is supposed to gain control over them.

Gai Jatra is commended each year in August/September following the Solar calendar and in the Nepali month of Bhadra. This is one of the most famous celebrations in Nepal as it is brimming with humor, parody, satire, joke, and shades of misery. Celebrated in Kathmandu/Bhaktapur/Patan and other places of the country.

Gai Jatra is celebrated most among Newar communities all through the country.  Newar people celebrate this festival to remember their family members who passed on last year by organizing the Gai Jatra parade driven by a cow. In the urban communities where there were no cows, youngsters spruced up and embellished themselves as cow used to substitute the cows.

The eight-day-long celebration, Indra Jatra falls in September and is one of the most famous and valued celebrations of the Newari people group of the Kathmandu Valley. This celebration is named after Lord Indra-the God of Rain and the King of Heaven is commended by both the Buddhists and Hindus.

It starts with the erection of a wooden post made of pine at Basantapur Square in front of the old Hanuman Dhoka Palace. Hundred of people gather at the Basantapur Square for the pole raising ceremony. The chariot of Kumari, the Living Goddess, is taken out in a parade through the central avenues of Kathmandu. Lakhay; masked artists rampage every evening joined by loud drums.

Indra Jatra is commended by Nepalese to pray Lord Indra and Dagini for a decent harvest and remember the deceased in the previous year. Indra Jatra is also known as Yenya, Yenya Festival comprises two sections, specifically Indra Jatra and Kumari Jatra. The festivals of Indra Jatra incorporate the flagpole function, blood sacrifice, showcases of Bhairava's masks, and so forth During Kumari Jatra, the living goddess will be taken in a chariot to the roads of Kathmandu.

Teej, likewise called the Festival of Women, begins from the second to the fifth day after the new moon in the month of Bhadra of the Nepali calendar and is specially celebrated in Pashupatinath. During this three-day-long celebration, you'll see Nepalese females dress in their lovely red saris all over and dance and sing in the road, visit temples in the heavenly and fasting mood. The wedded ladies would ask Shiva for the prosperity of life partner and kids and refinement of one's body and soul and the unmarried would expect to wed a decent spouse.

Haritalika is a mix of two words "Harit" and "aalika". Harit implies kidnapping and Aalika implies female companion. As per mythology, Goddess Parvati manifested as Shailaputri was the girl of Himalaya who guaranteed her hand in marriage with Lord Vishnu, as the idea of Naradmuni. Knowing this Parvati told her female friends and they took Parbati to a dense forest, so her dad wouldn't wed her to Lord Vishnu without wanting to. On the third day of the brilliant portion of Bhadrapud, Parbati made Shiva Linga off of her mind and implored. This makes Lord Shiva blissful and consented to wed Parbati.

Teej is a multi-day-long festival that incorporates extravagant feasts as well as rigid fasting. Nepali women believe that celebrating Teej will bring the long existence of her better half and a long and firm marital relationship between them. Teej is praised with folk music and dances.

Dashain is also known as Bijaya Dashami is the longest and most propitious festival of Nepal, celebrated for 15 days. More than Nepal, Dashain is the most propitious and anticipated celebration in  Bhutan, Myanmar, and a few places of Northern India also celebrate Dashain. It is celebrated during the month of Ashwin/Ashoj (late September and early October).
Going on for 15 days, it is held to praise the triumph of the goddess Durga over the evil. An enormous number of animals are sacrificed during this auspicious celebration. What's more, individuals staying far from homeplace would return home for a family get-together. You'll see beautiful kites flying in the blue sky and children playing on the swings.

All administration workplaces, instructive areas, and other private workplaces stay shut during Dashain. Dashain celebration falls either in September or October, beginning from the Sukla paksha, a lunar fortnight of the Ashwin, and finishing on Purnima, full moon day. Even though Dashain is 15 days long but most significant days are first, seventh. eighth, ninth, and tenth.

Tihar is commended as the second major festival of Nepal. It is a festival of Candles, lamps, and colorful Rangolis and flowers.  People clean and decorate their houses during this festival.  During this celebration, people worship a few creatures, similar to crows, dogs, cows, and bullocks. On the fourth day, all the houses are cleaned and brightened with candles, beautiful lights,  to invite Lakshmi, the goddess of abundance and wealth. That's why it's likewise called as Festival of Lights.

Distinct to Dashain, Tihar is a short celebration of 5 days in particular. As Dashain is celebrated by putting tika and jamara in the forehead from elders, Tihar is commended as easing up home and putting Saptarangi (7 coloreds) tika from siblings. Tihar is celebrated fifteen days after the Dashain. Tihar contains 5 days; Kaag Tihar, Kukur Tihar, Laxmi Puja, Gobardhan Puja, Bhai Tika. Since Tihar is a multi-day festivity celebration it is otherwise called Yama Panchak. It is commended on the late pre-winter. Individuals brighten their homes with lights, sing deusi bhaili tunes, dance and play cards, and lastly put colorful tika with makhamali mala. Tihar starts with kaag tihar in Trayodashi of Kartik Krishna Paksha and ends with Bhai Tika in Dwitiya of Kartik Sukla Paksha. Well known for the bright cheerful lights, it falls between late October and early November, going on for five days. 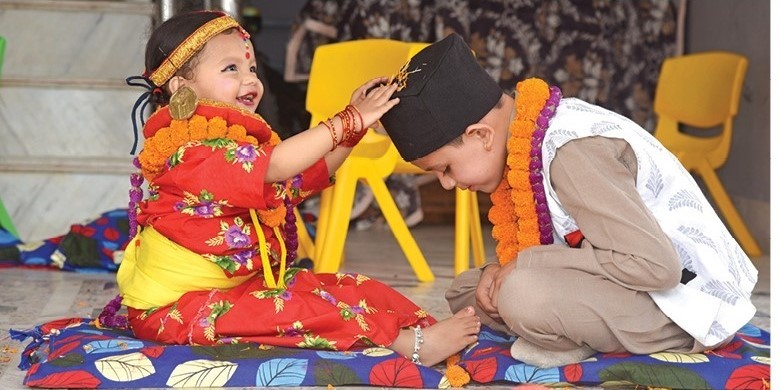 Lhosar is otherwise known as Tibetan New Year. Losar or Lhosar is the Tibetan word for the new year. Lo implies year or age and sar implies new. Losar is a celebration in Nepal, Tibet, and Bhutan. Losar is commended by just specific Sherpa, Tamang, Gurung, Yolmo, Bhutia, Monpa, Sherdukpen, and other Himalayan individuals group. It is commended by Tibetan Buddhists around the world.

It is celebrated at Bodhnath Stupa, Swayambhunath, Tibetan people group in Jawlakhel as well as the Solu Khumbu locale by Sherpa individuals. During this time all the Tibetan people group enjoy the happy environment. People greet and meet and exchange gifts with one another. The best spot to encounter Losar in Nepal is to search out a Tibetan cloister in Kathmandu and ask how they will organize Losar. Some will be managed, some will not. It is free of cost to join in.

Shivaratri is known as the dedicated night to Lord Shiva. It falls in the Nepali month of Falgun (in the middle of February-March). A huge crowd of Hindu followers is anticipated at Pashupati from around the world.   Sadhus frequently make long journeys to Nepal during this celebration and are situating in Pashupatinath a couple of days before or after Shivaratri. It is very intriguing to see those Sadhus on this day as the majority of them are half-stripped and not many of them are completely naked in the Pashupatinath sanctuary. The use of Marijuana and weed is illicit in Nepal however in Shivaratri, it is offered to Shiva and his devotees openly.

Shivaratri celebration is a preeminent to divine force of Hindu who is similarly known as Shambhu, Bhole, Mahadev, Shanker, Kailash, Pashupatinath, etc. Shivaratri is one of the main celebrations of Hindu individuals in Nepal and India. Shivaratri occurs on the new moon in Nepali Falgun month following the Nepali lunar Calendar. Different sorts of festivities are held in all the Shiva temples, and the scene is particularly stupendous at Pashupatinath Temple. You'll see a large number of provident priests assemble here from each corner of Nepal and India. 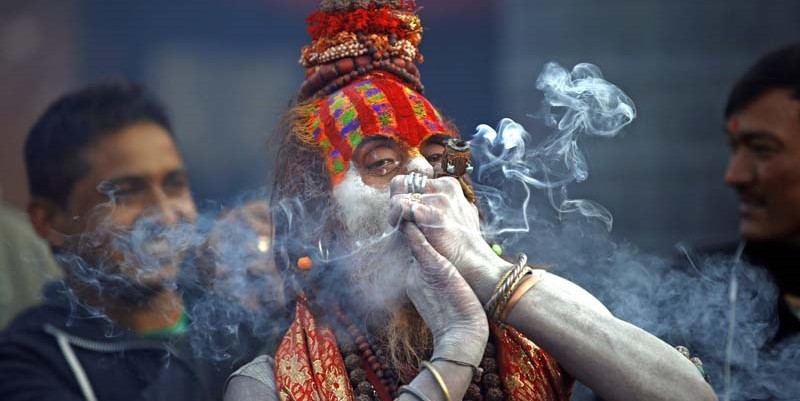 In the Terai region (Chitwan), Holi ordinarily falls two days after the actual Holi date. In the meantime, Kathmandu Durbar square, or Bhaktapur Durbar Square are the best areas for celebrating Holi with live music and concerts. 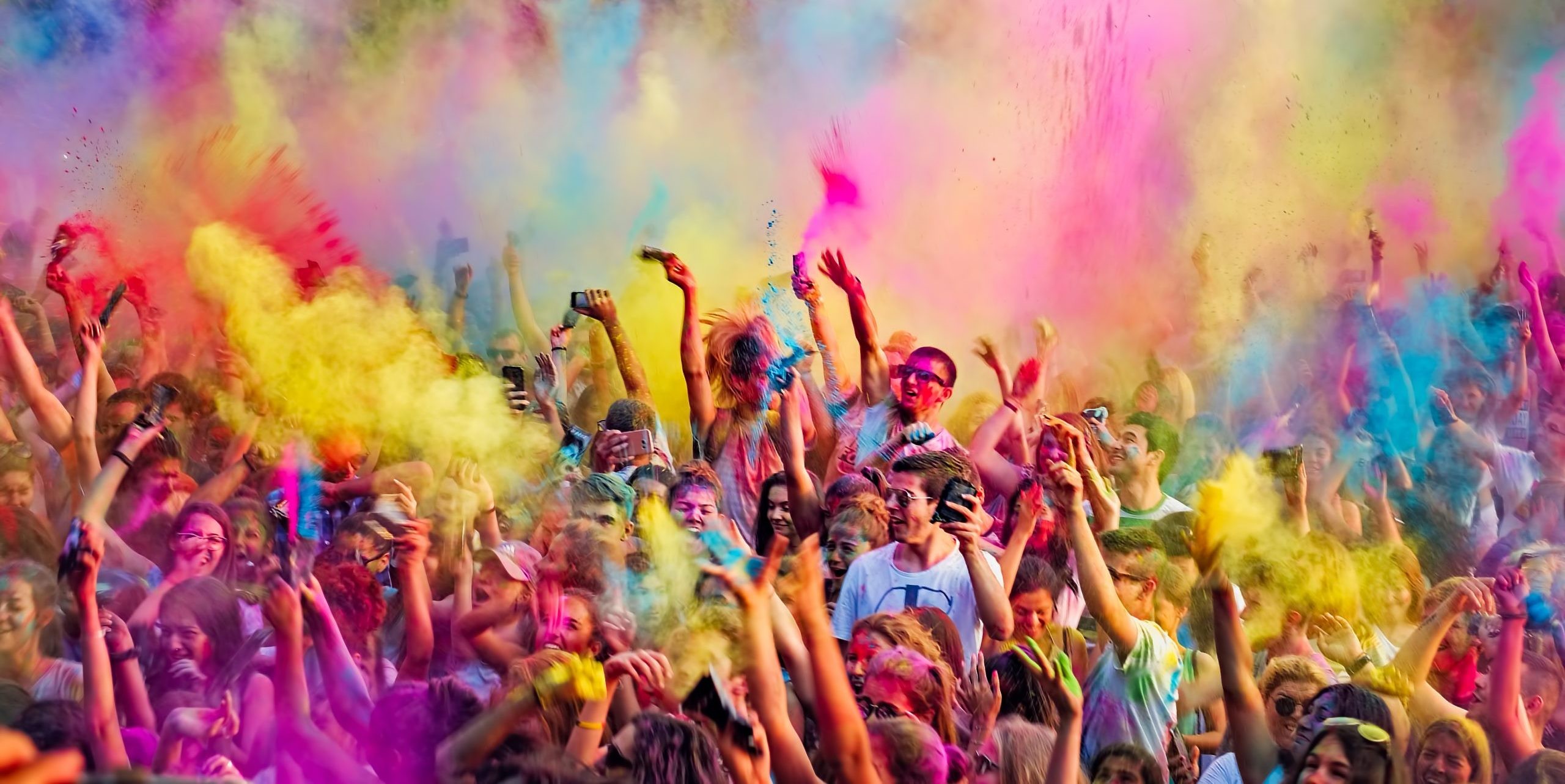