South Asia: Yard of the Heritages

The eastern shore that is among the oldest civilizations and modern settlements, South Asia is one of the best places to visit if you are a history explorer and ancient facts hunter. From the very first human civilization, worlds target every dynasty and rulers enthusiasm rule, to the modern-day urbanization and architectural wonder, South Asia is all for you.
India, Nepal, Pakistan, Srilanka, etc. are the very first land that has witnessed the activities of the ancient humans, their slowing growing ability, extraordinary talents, and skills. South Asia is the perfect destination if you want to find the modernization of humans. With the facts, the civilization from Indus valley and Harappan, the South Asian modern civilization continues to the Varanasi that is the one of oldest civilizations still in the huge settlements.
The brave and skillful ancestors had left their significance where they had presented their awesome arts and masterclass architecture. Here are some of the most popular heritage sites in South Asia. Check Out!

Varanasi, India
Varanasi, also popular as the Banaras, is one of the oldest modern civilizations still alive. For more than 6000 years, Varanasi is a continuous human settlement. The holy town was the center of trade, education, medicines, industrialization, and countless innovations, findings, and research. From modern accounting, economics, management, politics to the medical field, Varanasi and the devotees living there have contributed a lot and taught the world.
Along with trade and industrialization, Varanasi also developed the heritages, monuments, and several traditional architectural wonders in the bank of the holy river Ganga or Ganges form up through the freshwater from the Himalayas.

The town of Sadhus, Santas, Rishis, and Pandits, Varanasi is the best place to understand Hinduism, Buddhism, and many other religious concepts and philosophies. This historical place is the ground where lots of writers spend their lives contributing to their findings and results.
The ancient town is popular among the tourists for the historical and ancient temples and Ghats, Monasteries, and many other monuments.
Top sights/ place to visit in Varanasi 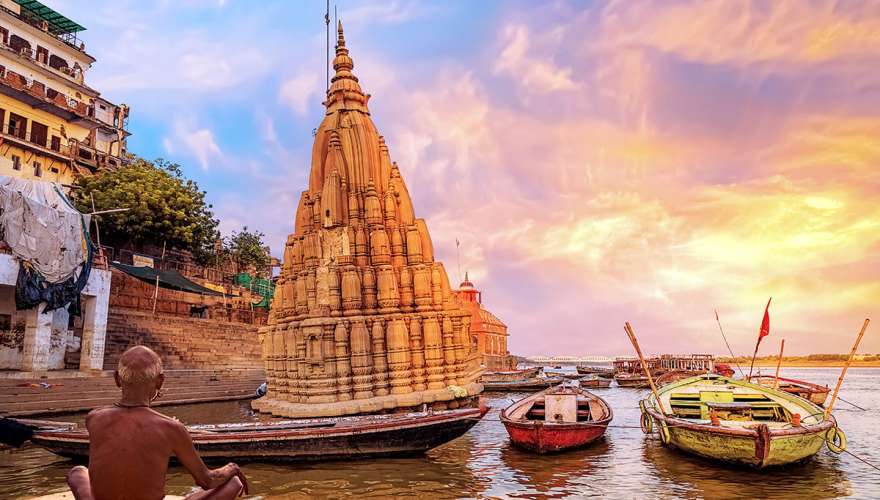 Agra, India
Popular for the Mughal Architecture and style, Agra is one of the most popular places in India. The historical land is renowned for one of the new seven wonders of the World and the name is “Taj Mahal”, the symbol of love. The Mughal Samrajya had given the places lots of its unique, and attractive style of architecture and skills of craving, crafting, and sculpturing, that’s why today Agra has three UNESCO World Heritage sites.
The Capital of Delhi Sultanate during the Lodi Dynasty, Agra is one of the major political places where Mughal added more attraction and art.

Lumbini, Nepal
The birthplace of Lord Buddha, Lumbini is the holy Buddhist land and the most popular tourist destination as well as the most iconic and holiest pilgrimage for the holy walkers, pilgrims, and Buddhist Devotees from all over the world. Lumbini is one of the oldest civilizations in Nepal and the Lumbini is the likely first republic kingdom by the name Ganrajya of Magadha.
Lumbini is the birthplace of Lord Buddha and his techniques and philosophy are the foundation of the present day Buddism. The sacred land still has the significance of the seven Foot Print of Lord Buddha which he made immediately after the birth of almost 6th century BCE and that is kept safe is preserved under the Mayadevi temple.
Alongside the Maya Devi Temple, Lumbini is popular for the numerous monasteries, Pagodas, and Chorten designed and built-in different architecture of different countries. The Eternal Flame or the peace lamp is another most attractive thing to experience. Although most of the monuments built by the Sakyas during Magadha Ganrajya are ruined with the time and migration of the Sakya during others' ruling.
Top sights/ Place to visit in Lumbini

Kathmandu, Nepal
The first modern civilization of Nepal, Kathmandu, broadly Kathmandu valley insisting Kathmandu districts along with Lalitpur and Bhaktapur District, is the largest concentration of the UNESCO World Heritage Site by land area. The Ancient City has much mythology over the first settlements while the back dates of the holy places and their initial findings are still a myth and which define more than the 5000-year-old historical backgrounds.
Kathmandu is the city of temples is the reason to call it the museum of the Temples. English people and foreign tourists used to describe Kathmandu as "The City of Temples, Every next House has a Temple, and Every Next Day is Festive" in the 70s to 90s before the overcrowded population of the city. Kathmandu has Seven UNESCO World Heritage sites that have been keeping the traditional Nepalese arts and magnificent art of carving and sculpting. The historical monuments are artfully presenting the rich skills and traditions of Nepal. Moreover, the monuments are adorned by the sculpture and crafting that are the symbolics of Nepalese cultures, tradition, different stages, and stories of Hindu Mythologies.
Swayambhunath Temple, Changu Narayan Temple, Boudhanath Stupa are some oldest temples and monasteries in Kathmandu that have history from 1 or 2 BCE and 6 to 7 CE, while, the existence of Pashupatinath and the symbolic Shivalinga is still mythic. The fortresses, Durbars, and palaces, and Durbar Square are the modern civilization or the urbanization of the 15th/16th century.
Top Sight/ Places to visit in Kathmandu 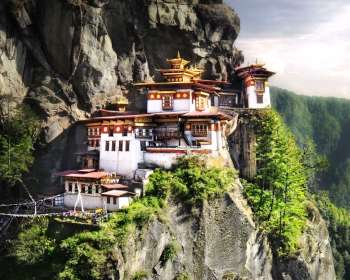 Bhutan is another popular Himalayan country being cultivated by native Bhutanese. Despite its small size, the Druk Yul is considered as one culturally valuable country as the Rinpoche had visited the Himalayan land. The LAmas and Buddhist supremes of the nation of different times had to build the Monasteries in different places.
Taktsang Monastery better known as Tiger Nest is the most popular and sacred place in Bhutan. In the cliff of Paro mountain facing towards the city of Paro, there is the cave and believe that the Buddhist Guru Rinpoche stayed there for a night while he was traveling in his flying Tigress. The name as a tiger nest came from the myth that the tigress of Rinpoche had lived there. Taktsang monastery is more than just a monastery, it is a monastic school, monastic stadium, and the center of Bhutanese people's faith and beliefs.
Ayodhya, India
The place where Bhagawan Ram was born as per the Hindu Puranas, is one of the richest cultural sites in India. The kingdom of Raja Dhasarath later Bhagawan Ram made it a Ram Rajya which means the kingdom of the general peoples is the holiest place among Hindus. Ayodhya is believed to be one of the oldest modern civilizations that are still settled.
Peoples believed that Ayodha had lots of temples before Muslim ruling rebuilt Majisds and other structures. Ayodhya is still one of the most popular holy towns in India.
Top Sights/ place to visit in Ayodhya 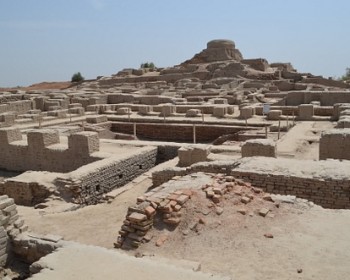 Civilization is the largest, more modernized, and more developed settlement. New Findings and researches are evaluating Indus valley civilization as the more backdated and even older civilization. Indus Valley is also the home for the rise of Hinduism and also the beginning of agriculture and cultivations. Before 1820, Indus Valley civilization was an uncovered and hidden thing but the excavation of Harappa and similarly Mohenjo Daro revealed lots about the pre-history of the India subcontinent. Indus Valley is backdated around 2500 BCE to 9000BCE during which time Hinduism arose, several modernized styles and skill, mechanical ideas, and new life standards arose. Among the oldest civilization, the Indus valley was much better, developed, and wealthy due to the new ideas like a fired brick to build the residencies. Excavation and the findings of archaeologists define that the citizens of Indus valley used to wear cotton and woolen clothes, farm and agriculture, and even cultivation and animal husbandry and animal domestication as well.
Along with Egypt and Macedonia, the Indus valley is another great place to find the growth and rise of humans from a social perspective.
The peoples of Varanasi and several other civilizations in the Indian subcontinent are also believed to come from Indus Valley after its Indus Valley’s extinction. Indus Valley is also believed to be the prehistory of Aryan People.
To the date, more than  1400 Indus valley civilization sites are discovered and expected to be discovered.

Muktinath, Nepal
Muktinath is one of the most popular tourist destinations and holy pilgrimage for the Hindu and Buddhist devotees. At the side of the Dhaulagiri Massif, Muktinath is the ancient temple. The outer structure has been renovated several times, however, it has a very long history connected with the human settlements in the Indian continent as the beginning of praying at the location is very old and associated with the Puranas and Holy books.
The outer temple structur4e is a small one that has the Gold Statues of the Human size of Lord Vishnu. With the bull's head size of tap, there are 108 holy water taps, which indicates the 108 Sri Vaisnava Divya Desams. According to Buddhism, Guru Rinpoche or Padmasamvaba himself stayed and meditated at the Muktinath.
The divine land is a more amazing place where you can see the plants and trees even at the height of 3800m. Remember, Muktinath is the world's highest temple located at the lap of the world's highest mountain pass, Thorong la Pass. Along with the cultural and religious values, the site is famous for its outstanding Himalayan experience.
Punakha, Bhutan
The formal capital city of Bhutan before Thimphu, Punakha holds one of Bhutan’ largest Monastery, which is called as the Pungthang Dewachen Phodrang giving the meaning of the palace of great Happiness or Punakha Dzong locally was commanded by Zhabdrung Ngawang Namgyal in 1637 and constructed by Tuebi Zaow Balip within 2 years of command. The country’s most beautiful monastery, Punakha Monastery is the central administration of Punakha provenance.
Punakha is renowned for rice farming as well. Both red and white rice are farmed in Punakha, irrigated by the Pho Chu and Mo Chu; rivers in Punakha.

Rameshwaram, India
Associated with the Ramayana, Rameshwaram is one of the oldest temples in India. According to Ramayana, the temple was first built by Vagawan Ram before going to battle with the Ravana. Lord Ram prays and takes the blessings of Lord shiva at the beach of Rameshwaram before battling with the Ravana and also pray after the completion of the battle for liberation to “Paap” he committed during the war and Brahmin Hatya; Ravan was the Bramhan Devil.
Legends also consider that Lord Ram with this apes army built the bridge from Rameshwaram to Sri Lanka which still exists and geologies say that the limestone underwater has joined Indian Subcontinent with Sri Lanka which is accessible to walk till 14/15th century.
Top Sights/ Place to visit in Rameshwaram

Other Heritage Sites in South Asia