Pura Tanah Lot: Most Popular and Most visit Temple In Bali

What is the meaning of Tanah Lot?

The name of the Temple as Pura Tanah Lot is derived from the location and the pose the entire foundation of the temple is lying on. The Tanah Lot temple is constructed in a rocky formation/ outcrop that is separated from the cliff. Tanah lot in Bali means “ The Land in the Sea”. Hence, Pura Tanah Lot means a temple that is on land in the ocean.

Where is Tanah Lot temple in Bali? Where the Pura Tanah Lot is Located?

Which God is worshipped in Tanah Lot Temple?

Remember that the Tanah Lot Temple is the faithful and religious place for the Balinese Hindus and also a holy pilgrimage for the peoples believing in Hinduism from around the world. As the temple is over the sea, the temple is also dedicated to The God of Ocean as per the Hindu Mythology. The temple has been used to worship the Lord Barun or Bhatara Segara, and the Balinese people also call him Dewa Baruna.

When was the Tanah Lot Temple built? Who built The Pura Tanah Lot?

The Pura Tanah Lot has been a major part of Balinese history and Mythology. The temple is one of the Seven Sea Temples in Bali.

Pura Tanah Lot or Tanah Lot Temple is from the 16th century. When Dang Hyang Nirartha traveled to the South Coast of Bali, he saw a rocky formation with an iconic figure and took a rest. Some fisherman saw him on the island and presented some gifts and food/ fruits to him. Later Dang Hyang Nirartha told the fisherman to build a Temple as he believed the rocky formation is the holy land. He suggested that the place is the best to worship the Balinese God of the Sea as per the Hindu Mythology, and from then the Worshipping of the Lord Barun/ Dewa Baruna has been conducted with great happiness and faith.

Who is Dang Hyang Nirartha?

Dang Hyang Nirartha is the Shaivite religious figure in Bali who is also known as Pedanda Shakti Wawu Rauh in Bali. He is the founder of the Shaivite in Bali. He traveled to Bali from Java to become the chief counselor of the King Dalem Baturenggong Gelgel. He also introduced the Padmasana in Balinese Hindu Temple Architecture known for his contribution to the refashioning of Balinese Hinduism. He also introduced the principles of Moksha in Indonesia and the priesthood of Shaivite which is now found everywhere in Bali.

What is the size of the Tanah Lot Rocky Formation?

The Pura Tanah Lot or Tanah Lot Temple is built in the 3 acres sized Rocky Formation that is 20 meters cropped from the cliff line.

What is the best time to visit Tanah Lot Temple?

During the festival of Odalan, the whole temples bloom with the great culture and loops in the beautiful culture. The Balinese Women in beautiful traditional costumes come to the temple carrying fruits, foods, flowers, and other offerings in their heads to pray at Tanah Lot Temple that are the best moments to capture in your reels. The whole surroundings will be arranged properly, parking lot, toilets, Arts shops, food stalls, restaurants, hotels, open stage, tourist information center, medical teams, helpline, and health safety Everythings managed. The whole rocky formation blooms with the blush of the tropical flowers and many wilds plans and flowers.

How much does it cost to enter Tanah Lot Temple?

The Tanah Lot temple entrance fee applies to both local and foreign tourists.

The entrance fees sound a little cheap but don’t confuse it with the exchange rate of the Indonesia Rupiah. The exchange rate between USD to IDR is around IDR 14000 for 1 US$.

Every religious site in Bali has its etiquette and rules that everyone has to follow. Like in other temples in Bali, Worshippers have to put on the Scarf or sarong and cover from Knee to Shoulder. Also, have to round the waist by the Sash.

For more Balinese Temple Etiquettes, and Rules check the blog addressed below. 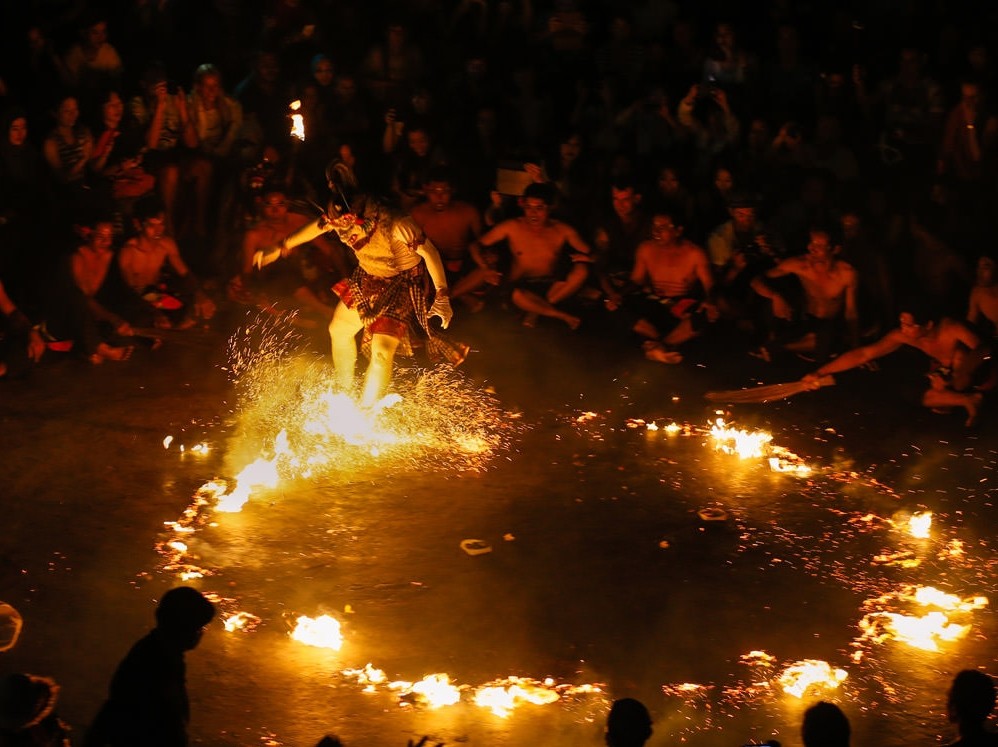 Kecak dance at the Tanah Lot is the best mixture with a magical sunset and supernatural lighting while the Sun dives into the ocean.

What about the Myth of Holy Snake at Tanah Lot Temple?

The myth is somehow real as the sea snakes around the rocky cliff of the formation are found. And, locals believe those as the holy snake and even touch them without fear of counterattack.

Or you can choose the best Bali tour packages from the like below: