Lots of readers and viewers confuse and ask questions that “what is Pura?” or “What does Pura in Bali mean?” For your Knowledge, Pura is a religious site in Bali, Indonesia where the Indonesian Hindus use to pray and worship the Gods and Goddesses as per the Hindu rituals and practices. Pura means nothing but simply a Hindu Bali Temples. The word Pura is derived from the Sanskrit word ‘Pura’ which means “ The Walled City”. From the meaning in Sanskrit, it is easier to understand that Balinese temples are Compounded and surrounded by a wall, and the inner zone consists of Temples.
Pura or Balinese Temples are so marvelous and full of art everyone loves. Puras are built according to the rules, guidance, and rituals of Balinese Architecture. Unlike the Hindu temple in the Indian subcontinent where temples are enclosed, the Balinese Temple is an open-air place within enclosed walls. The compound/ Walled premise of the temple consists of several Shrine towers, namely Meru and Bale:- Pavilions.
The Pura/ Balinese Temples are built in the Tri Mandala Concept of Balinese Architecture influenced by the Hindu concepts of designing and constructing. The Spaces are allocated as per the Tri Mandala. The whole compound premise is separated into three-part. The entrance gate takes to JABA; the Outer Courtyard consists of Bale; pavilions. Candi Bentar; The inner gate is the entrance to the Middle Courtyard consisting of pavilions and few other structures. The Kori Agung; gate to enter the inner courtyard, takes to the third Mandala where shrine Meru are built and at the center, the Gedong Pariman is the seat to Gods who believed visit during Ceremonies, the Gedong Pariman is always left empty and no one seat at the palace.
Every Hindu Temple in Indonesia is traditionally built in the Tri Mandala Conception. There are thousands of temples in Indonesia, and Bali singly consists of above 20,000 temples. All those temples are unique and present the rich Bali traditional and culture, arts, and architecture. It is very hard to list out the top or best temples from that long list but by the numbers of the visit, accessibility and travel duration, and popularity, we can simply list out at least which temples the tourist must have to visit in Bali. Here in the article, we have listed the top 10 best Balinese Temples the traveler must have to visit at least one out of those. Remember every Pura/temple is superbly wondering. The list is as per the rating, it is all of the popularity and accessibility.

Tanah Lot Temple or Pura Tanah Lot is the most popular and most visited temple in Bali. Every tourist arriving in Bali reaches the Jalan Raya Tanah Lot to witness the outstanding and the top experience in Bali. Tanah Lot Temple is probably the most photographed temple in Bali as well as in entire Indonesia. The Iconic temple is one of the six Sea Temples in Bali and a wonderful marvel that everyone loves to visit. Outcrop separated from the coast shows stunning views when tides hit the lower part of the rocky formation. Tanah means Land and Lot means sea, so Tanah Lot means land in the sea. The Tanah Lot Temple is dedicated to the God of the sea; Lord Baruna (Dewa Bhatara Segara).
The best time to visit the Tanah Lot Temple in the late noon or early evening for the astounding sunset views. The Sun presents magical lightings while diving into the ocean. The colorful reflection is the best thing to capture in your memories.

Another most visited and most wondering temple in Bali is the Uluwatu Temple. The Pura is at the edge of the cliff with a drop of 70 meters in Height. Uluwatu temple is also popular for daily performances, namely Kecak Fire Dance which is the cultural dance performance to present the stories from the Epic Ramayana. More than 65 individuals collaborate to perform the Kecak Fire Dance.
Along with the Kecak Dance, Uluwatu Temple is also renowned for the brilliant stone carving and other sculptures used to build the entire Pura. The wide pavilions and shrine Merus are the best backdrops for your photos. When you watch toward the Shrine Merus or the Gedong Pariman, it’s so amazing as nothing but only the temple towers are seen and look like there is nothing behind it or it is the end of the world.

Ulun Danu Beratan Temple, Pura Ulun Danu Beratan, or Pura Bratan is one of the major Shiva Temples in Bali, Indonesia. Located at the western shore of Lake Beratan near Bedugul, the floating Pura is heaven in a lake and a famous picturesque landmark that is a perfect recreational place. Apart from the rich arts and architecture of the Pura, the cool atmosphere and strong vibes in the air are perfect for rejuvenating mentally, physically, and spiritually.
One of the nine Kahyangan Jagat, Pura Ulun Danu Bratan consists of 5 Shrines dedicated to other Hindu Gods along with the 11-story Pelinggih Meru dedicated to the supreme god Lord Shiva and Parvati.
Pura Ulun Danu Bratan is the real example of religious harmony in Bali where the Buddhist Stupa is also built.

At the height of 1000M, Besakih Temple or Pura Agung Besakih is the largest, holiest, and most important Temple in Bali. The complex of Pura Agung Besakih comprises 86 temples including Pura Penataran Agung and 18 other Pura. The Besakih Temple is also known as the Mother Temple of Bali. The 1000-year-old complex had even survived the catastrophic Volcanic eruption of 1963.
Surrounded by breathtaking scenery, the Besakih Temple is hustled between the undulating rice paddies terrace, beautiful mountains and hills, and the streams serving Bali. as the pilgrimage site, Besakih Temple is moreover the best heritage site in the entire Bali that gives the visitors a top experience. The panoramic mountain views including Mount Agung, the staircase takes to the paradise at the top of the mountain where about 86 temples with brilliant looks offer a stunning atmosphere.

Goa Gajah is one the best heritage sites in Bali one must have put it on the list while traveling around Bali. The centuries-old temple built at the mouth of the cave is so amazing to explore the carvings and crafting at the walls and outer face of the cave. The Goa Gajah is also known as the Elephant cave temple. The word ‘Gajah” of Goa Gajah means an Elephant. Alongwith the beautiful architecture and the skillful arts, the Temple and entire complex are best to understand and witness the Millennium's old historical facts and backgrounds.

The landmark of Mengi Village village and remarkable icons of Bali, Taman Ayun Temple is one of the six royal temples with a charming and stunning atmosphere. Surrounded by the fabulous scenario, The Temple is a spiritually and historically important heritage. Taman Ayun means the Garden Temple in the water. And the Taman Ayun is the Water Palace and a religious site that presents rich Balinese architecture and the skills of artisans. Folded in greenery and serenity, The Pura Taman Ayun 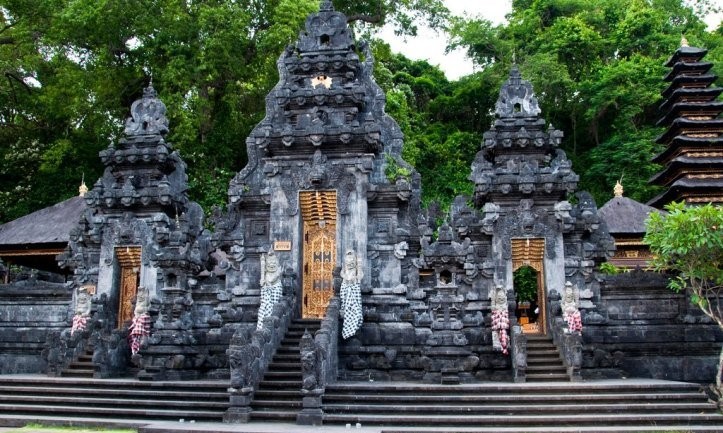 and complex boast marvelous traditional architecture; the courtyards and enclosures all give a unique look. The Lotus Pond and Fish Pond inside the complex present absolute divinity of the location.

Whatever you enjoy in Bali, Goa Lawah Temple is the gems that give awesome light to your Bali tour. At the Southeast coast of Bali, the rich-skilled artisans of Bali built a uniquely beautiful temple/ Pura at the face of the Cave. The series of temples and shrines, Meru had built in the outer out the cave and all give amazing evidence of the rich Bali architecture and skills. Because of the herds of Bats living in the cave, the temple is also known as “The Bat Cave Temple”. Along with the beauty of the artisans, the serene atmosphere of the temple and the beautiful greenery around the landscapes give amazing views.

One of the largest water temples in Bali, Tirta Empul is a famous and popular water temple in Bali known for holiness. The Holy water from the Tirta Empul is used for purification rituals and washout the sins one has done. The beautiful temple complex contains beautiful Tropical plants and gardens, and statues amidst lush green vegetation are awesome to frame in your reel. The beautiful and tranquil pond behind the gate retouches what you capture experience there.

When talking about Gunung Kawi, the first thing is to understand the age of the temple. Gunung Kawi is among the oldest temples in Bali as well as in Indonesia. Situated near Tirta Empul, visiting Gunung Kawi gives a distinctive experience. Descend about 370 steps and, the mysterious ancient temples amaze you with the wondering atmosphere.
Bali is a mysterious island and typical with the unique and amazing culture and tradition the Balinese people share. There are more than 20 thousand temples in Bali. All those temples are so awesome. The beauty of an artisan presents evidence of the rich and skillful art of the locals. Moreover, the above temples have lots of temples to visit in Bali. If you want to take a Temple tour in Bali, please Contact Us for more information.
Relax Getaways has been offering the best tour packages for Bali. If you like to enjoy your valuable holidays in mysterious Bali with Relax Getaways, go through the like below to select your best Bali tour package.